You’ve probably already heard about the Zerologon vulnerability (aka CVE-2020-1472) but in case you haven’t, here is what it is in a nutshell; and more importantly here are our insights on how to detect it.

Many approaches for the Zerologon detection were posted out there, either leveraging Sysmon or IDS tools, all ending up with installing or running a tool. If the Zerologon patch became a headache for your organization as we predict it has; then with a pinch of built in windows auditing (no agent needed) and knowing where to look, you’ll be able to detect the exploit activity as it happens.

While examining the exploit, our research team found out that by inspecting the right ‘Windows Filtering Platform’ event you can detect the exploit activity.

Let’s go through the CYREBRO process

For the purpose of simulating the exploit, we used two Windows machines:

Successful execution of the exploit against an unpatched machine

As the exploit was doing its thing, we started seeing a bunch of ‘Windows Filtering Platform has permitted a connection’ (event id 5156) events being created on the victim machine. 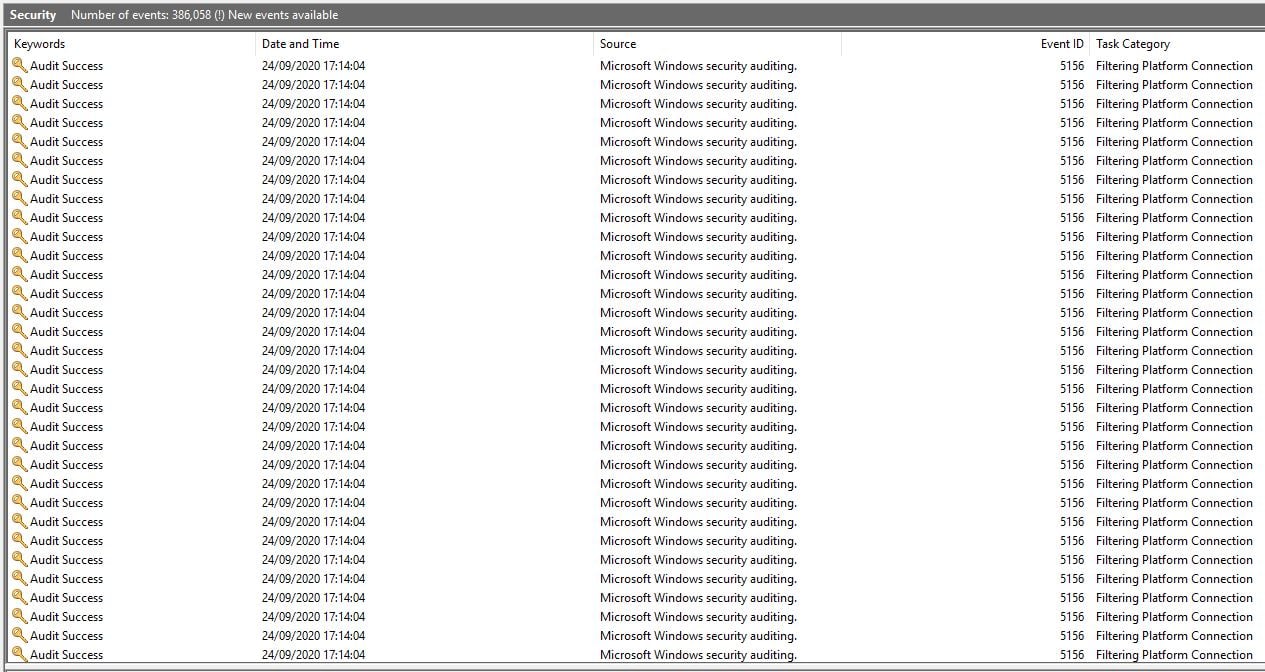 While taking a closer look at the events that were generated, we have noticed that two Windows processes are populating the event’s application name field; the first was ‘svchost’ and the second was ‘lsass’. These events were spawned back to back in the event log with close proximity, in addition to the fact that the events timesteps matched the exploitation execution timeframe.

Then, we ran more tests to validate this behavior. As a result of these tests, we started establishing the pattern for detecting the Zerologon exploitation activity.

In all of our simulations, the first ‘Windows Filtering Platform’ event that was generated as a result of the exploitation activity, had ‘svchost’ as the application name and the destination port was 135 (RPC).

This behavior corresponds with the nature of using the Netlogon Remote Protocol (MS-NRPC), as ‘svchost’ is listening on port 135 on a Windows machine. 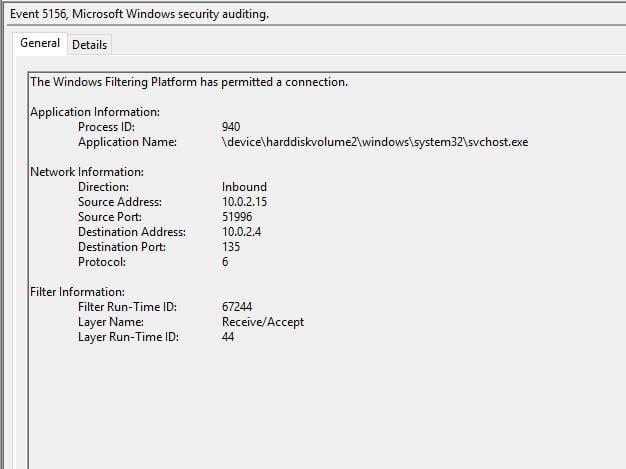 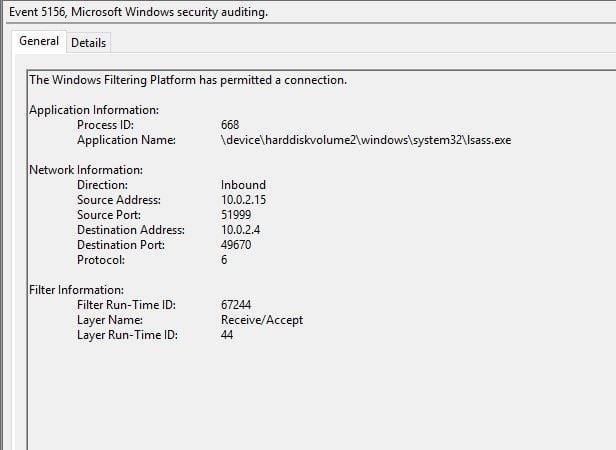 By inspecting the output of the packet capturing, we found that the total number of TCP streams matched the number of the Windows Filtering Platform events that were created on the victim machine event log.

Here is a screenshot of the last 4 request that were issued as a part of the exploitations attempt.

As you can see in the screenshot, the requests are in the following order:

During the test, the average number of exploitation attempts it took to set the new password, varied from 86 (the lowest) to 1027 (the highest). However, the number of attempts can be lower (based on Secura’s discovery) and can also be higher (as the script has a hard limit of 2000 attempts).

From these experiences, we built a detection logic theory that was examined and evaluated against ‘big data’ events pool from multiple production environments across the globe.

That is how we came up with the following detection logic.

First, you’ll would need to make sure that the auditing policy is enabled. 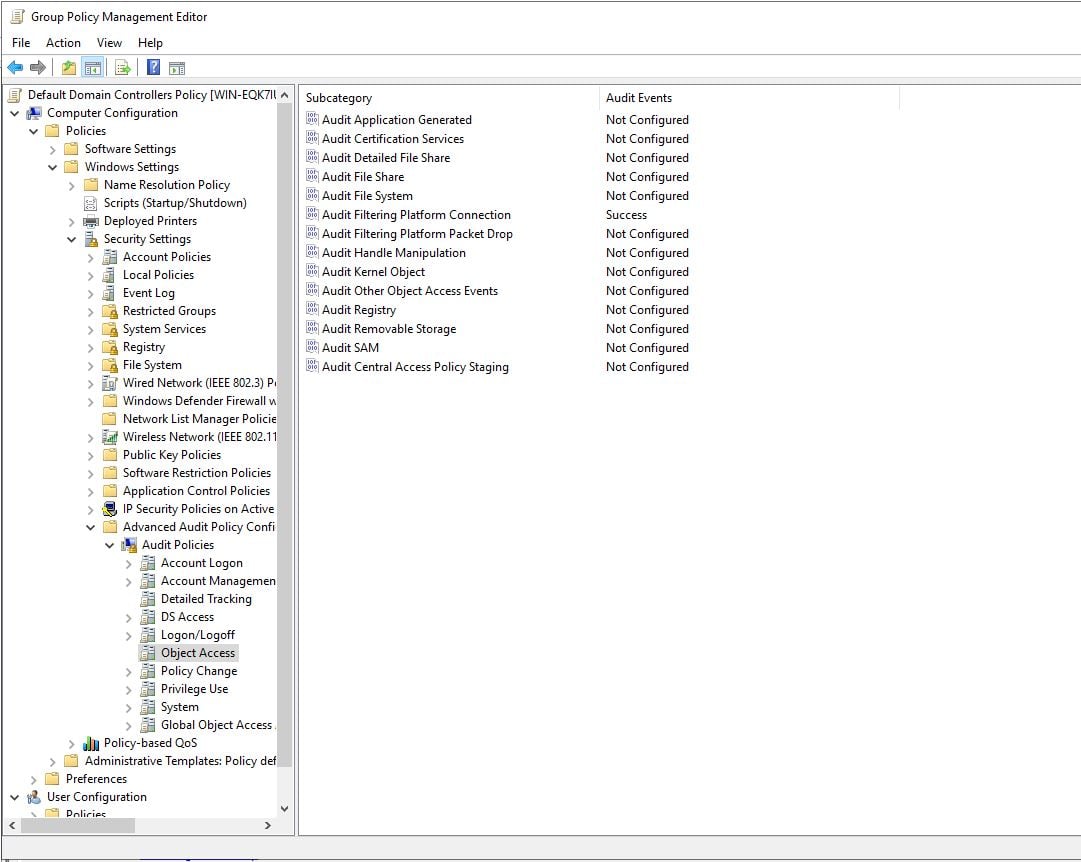 Now you can go ahead and apply the following detection logic in your SIEM or Logger solution.

Now you’ll need to combine the both datasets to a single alert rule.

The rule should trigger an alert when:

have matched (a total of 40 events or more) from the same source ip to the same destination ip within 5 seconds.

Note: if your SIEM solution does not support ‘seconds’ timeframe, set the timeframe to 1 minute.

This detection is valid for both unpatched and patched windows machines as the same behavior was observed even after the victim machine was patched, even though the exploit was not successful.

Unsuccessful execution of exploit against a patched machine

In conclusion, we expect that Zerologon exploit will probably be a favored choice by attackers from now on, which is exactly why you should monitor this activity whether or not your organization is patched.